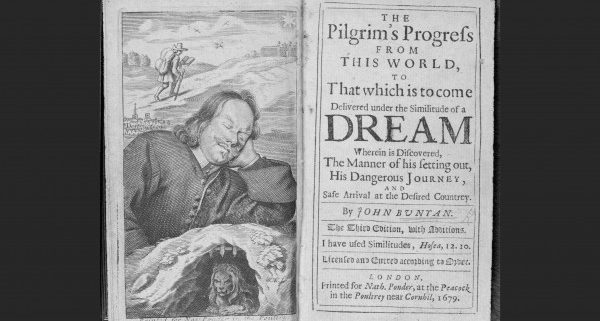 “There is nothing new under the sun,” Ecclesiastes says. That’s because we humans have always been on the same journey.  John Bunyan wrote his classic, The Pilgrim’s Progress, about 350 years ago, yet what he describes is as modern as high speed internet.

Bunyan became a Christian as an adult and began to preach. But preaching outside the Church of England was illegal (religious freedom is a fragile thing).  He spent 12 years in jail because he refused to conform.  While incarcerated he wrote the famous manuscript, a book now translated into over 200 languages.

Pilgrim leaves the City of Destruction carrying a heavy burden. Evangelist urged him to follow the light to the narrow wicket gate.  Worldly Wiseman re-directed him to the village of Morality to seek a man named Legality.  This diversion worsened his misery.  Evangelist found him again and explained that Wiseman “favors only the doctrine of this world (therefore he always goes to the town of Morality to church) and partly because he loves that doctrine best, for it saves him from the cross.  This Legality is not able to set you free from your burden.”

Pilgrim finally passed through the gate and found the way. “He ran thus til he came at a place somewhat ascending, and upon that place stood a cross, and a little below in the bottom, a sepulcher.  His burden loosed from off his shoulders, and fell from off his back, and began to tumble til it came to the mouth of the sepulcher where it fell in.”  The pilgrim, called Christian, gave three leaps of joy, saying, “Blest cross!  Blest sepulcher! Blest rather be, the Man that there was put to shame for me.”

Bunyan offers an invitation. “This book will make a traveler of thee; if by its counsel though wilt ruled be.  It will direct thee to the Holy Land, if thou wilt its directions understand.”  Jesus gave us pilgrims this travel guide: “I am the Light of the world; he who follows Me will not walk in the darkness but will have the Light of life” (John 8:12).  Are you making progress that way?