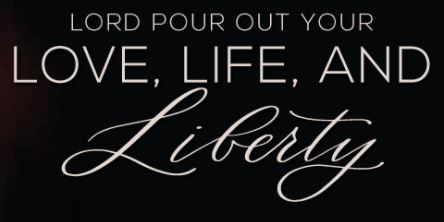 The theme for this year’s National Day of Prayer was, “Lord, pour out your love, life, and liberty.”  What an encouraging and timely prayer!

President Harry Truman inaugurated the National Day of Prayer in 1952.  That same year, Paul Harvey wrote a book for Americans. He warned that fear is a tool to control people.  He wrote, “man + fear – God = man over man.”  Almost 70 years later, politicians, media, and activists still mix fear and godlessness to accrue power.  You may be aware of what’s happening but rather than responding in fear, trust the presence of the Lord to give you freedom from fear.  That is a liberty no one can take away.

The zeitgeist (cultural mood) of today entraps the soul.  Professor Carl Trueman writes that it “prioritizes victimhood, sees selfhood in psychological terms, regards traditional sexual codes as oppressive, and places a premium on the individual’s right to define his or her own existence.”  Such a mood coerces people to create an identity, morality, and meaning “ex nihilo” (out of nothing). They’re trying to build a smart phone with sand and a screwdriver. The good news is that God created with order and meaning, so when you discover His design and purpose for your life, you are liberated.

Another drain on freedom is unrestrained government.  Levying usurious taxes, spending borrowed money, imposing overburdening regulations, removing incentive to work, and funding the extermination of unborn humans are forms of tyranny.  The totalitarian impulse brands as a bigot anyone who speaks out to protect the innocent and preserve freedom.  As government grows in power, we’re reminded of Lord Acton’s famous maxim, “absolute power corrupts absolutely.”  The good news is that we know One who is more powerful and can displace tyranny and totalitarianism with liberty.

By far your greatest need for liberty is not from fear, culture, or government.  You can suffer in a prison of sin without seeing the bars, but you can be set free! This is why the gospel is such good news!  Jesus said the Father “has sent Me to proclaim release to the captive…to set free those who are oppressed.” (Luke 4:18).  Oppressed by what, you ask? He answers, “Everyone who commits sin is the slave of sin…so if the Son makes you free, you will be free indeed” (John 8:34, 36).  Step into the sunlight of that freedom!

The National Day of Prayer is an important reminder that “God rules over the nations” (Psa. 22:28), but you can pray for liberty any day.  Join me in praying that Americans experience the liberation they seek, the freedom found only in Christ Jesus.

Enjoy His Presence
Scroll to top