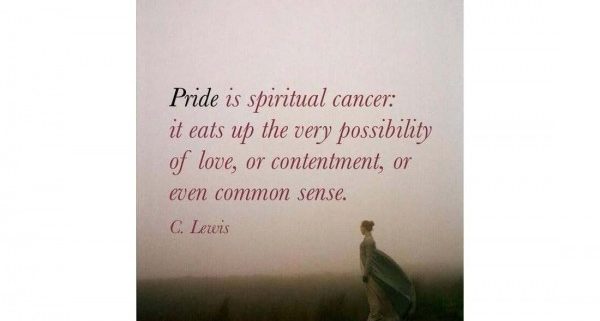 Stunned when confronted with his own arrogance, Charles Dickens’ character Ebenezer Scrooge received his comeuppance. He had suggested that the poor should die as “surplus population.” The sarcastic ghost implied ailing Tiny Tim was surplus to Scrooge, then hit him with, “It may be, that in the sight of Heaven, you are more worthless and less fit to live than millions like this poor man’s child.” Pride is ugly.

“If anyone thinks he is something when he is nothing, he deceives himself” (Gal. 6:4). The extent to which self-deceit corrupts whatever it touches cannot be gainsaid. This sin is part and parcel of every other sin. Thank God that Christ offers forgiveness for even this, something we can boast about.

C. S. Lewis in “Mere Christianity” explains, “Pride leads to every other vice: it is the complete anti-God state of mind.” Pride wants more than, and looks down on others because it is competitive. It claims that my (ideas, connections, job, church, kids, etc.) are better than yours. I have more (money, intelligence, attractiveness, spirituality, etc.) than you do. Pride says that I am more important, yet the Christian ethic is, “Do nothing from selfishness or empty conceit, but with humility of mind regard one another as more important that yourselves” (Phil. 2:3).

The results of pride are harsh. It cannot truly love, since love is selfless (1 Cor 13:4). It is likely the cause of most of the misery in the world. Ultimately, it separates from God by thinking oneself wise, while being a fool. For ages, people have “exchanged the truth of God for a lie, and worshiped and served the creature rather than the Creator,” a predictable outcome of pride (Rom. 1).

Chuck Colson tells of his visit with Tom Phillips who had become a Christian, and was changed. Phillips read Lewis’ words to Colson. “As long as you are proud, you cannot know God. A proud man is always looking down on things and people: and, of course, as long as you are looking down, you cannot see something that is above you.” As Colson left his friend’s house, he wept, and cried out to God. He knew he needed Jesus. Pride no longer stood between him and God.

The antidote for pride is not to try harder to be humble. It’s faith in Christ, which informs you of your true identity. When you admit that you are not all that, and you cannot fix yourself, then you are on that narrow way to the small gate that leads to life. And you will finally have something to boast about: Jesus and what He has done. “Let him who boasts, boast in the Lord” (1 Cor. 1:31).