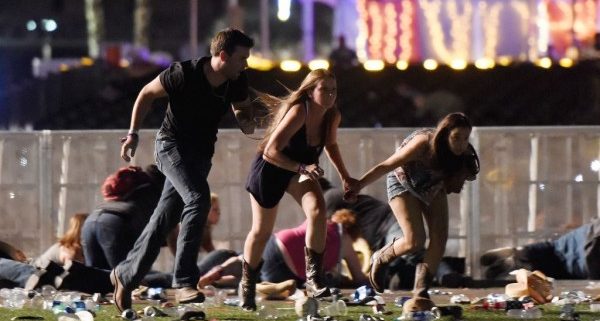 I have never heard an animal ask a question, except maybe “Where’s the food?”  But people have lots of questions.  We live in a world of beauty and beastliness.  The questions arise we as try to reconcile the two.

The questions you hear after a mass shooting like Las Vegas are about motive and gun control but extend much further:  How can humans have such a wide variety of perspectives?  How is it that we’ve made it this far as a species and can still be so opposite?  How could one human do this to others?  Why does nothing make any sense?  Do any lives really matter?  Is life a riddle not meant to be solved?

If life began with chance occurrences in the midst of chaos, then indeed life doesn’t matter.  We’re but a blip in the cosmic timeline, an honest conclusion from such a worldview.  If life has no purpose or value, why reform gun laws to protect what has no value?  If everyone can decide his or her own morality, why not allow that the Las Vegas shooter was right in his own way?  The rationalist answers that humans can collectively discern what has value, but as Ravi Zacharias points out, “How do you trust your reason and logic if it came about by chance and chaos?”  A worldview that excludes God does nothing for those who suffer, and removes all hope that anyone ultimately can.

In the aftermath of WWI, the poet William Yeats penned these lines:  “Turning and turning in the widening gyre, the falcon cannot hear the falconer. Things fall apart; the center cannot hold. Mere anarchy is loosed upon the world. The best lack all conviction, while the worst are full of passionate intensity.”  It’s fair to ask today, “How do we live with more conviction about what’s true, and less intensity about what’s not?”

The center wasn’t holding 2800 years ago, when the Falconer sent his prophet to call to repentance a nation destroying people with its brutal use of power.  But Jonah would rather die than see God forgive them.  God said, “Should I not have compassion on Nineveh, the great city in which there are more than 120,000 persons who do not know the difference between their right and left hand?” (Jonah 4:11).  A God of compassion is reason for optimism.

Considering the world today, John Lennox asks, “Is there evidence that there is a God we can trust with it?  The Cross answers: God does not remain indifferent but enters into it.”  We are not alone, and the answers to life’s questions are found in the God who endured the worst humans have to offer, yet still loves and values you.