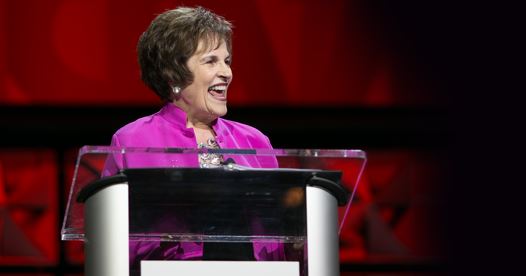 I attended a conference once, where one of the speakers mentioned the name Mo Anderson. A wave of admiration swept the cavernous hall. I didn’t know her.

In her book, A Joy-Filled Life, she tells about a critical time in her faith journey. Her parents raised her in a Christian home, including church attendance, family devotions, and prayer. As a university student, a professor asked her class, “How many of you are Christians?” She raised her hand. “I’m here to challenge that,” he said. After that, for five years she wandered in the wilderness of agnosticism, not sure if God exists or cares to be involved in her life.

When her son Rick was young, she and her husband took him to Sunday School. They attended an adult class she considered boring. But one Sunday a bolt of lightning struck her thoughts: “Either Jesus was who He said He was, or He was the biggest liar and impostor the world has ever known.”

The next day, she saw an ad in the newspaper. The Lutheran church was advertising a basic class in Christianity, “Is Christ real?” That is basic, because if Jesus isn’t God the Son, and if his death and bodily resurrection didn’t happen, then it is religion but not Christianity. Anderson and her husband attended the class.

The first evening of the class, the pastor explained that the Bible is two books. “The first book, the Old Testament, is the history of a nation that gave birth to a man called Jesus. The second book, called the New Testament, is about this man’s life and its meaning.” Those words gave Anderson a framework for understanding salvation history, culminating in Jesus’ death on the cross. She began to learn of the transcendent meaning of that event in terms of forgiveness of sin, new life in Christ, and the hope of eternity.

She had attended church for much of her life, but not until she was an adult did she place her faith in Christ Jesus as her Savior. She prayed, “I don’t understand all of this, Lord, but I’m going to give you my life. I’m going to do my best, based on my understanding, to give you my commitment and my loyalty from this day forward.” From that moment, her life has had purpose, direction, peace, and hope.

At that conference I mentioned, I had the opportunity to meet Mo. (She insisted I call her that!) I found her to be warm and engaging, and a woman of real faith. Is yours a story of real faith?

The Reconciliation
Scroll to top