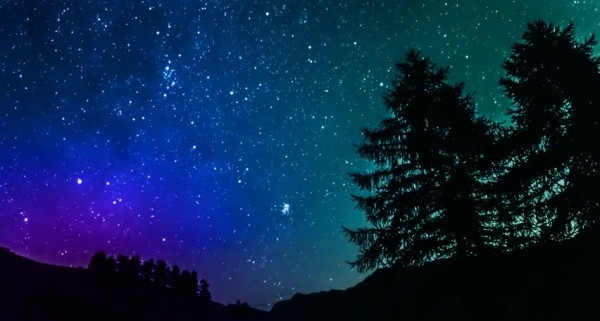 Our town has the advantage over the big cities. We can see the stars. The ones in the sky, not on the red carpet. The human fascination with the night sky says something about us.

Scientists say the observable universe is 93 billion light years in diameter. In that space are billions of galaxies, each with billions of stars. Yet when you tilt your head heavenward at night, you might see 5000 stars from horizon to horizon. What you see hints at the unseen. It captures the imagination, and makes you feel small. Alister McGrath (“Glimpsing the Face of God”) writes, “Maybe the stars point to something mysterious, something unfathomable, which somehow lies beyond them. Something seems to lie beyond the whispering orbs of the night. But what? And how is it to be known?”

Since the times of Adam, Abraham, and Moses, God has been revealing himself through creation while promising a personal appearance. Yet what human could fathom how the transcendent One, vaster than the visible stars in the sky and the invisible galaxies beyond, could actually care about this speck of dust and the people who live on it? The ancient text says, “He heals the brokenhearted and binds up their wounds. He counts the number of the stars; He gives names to all of them. Great is our Lord and abundant in strength; His understanding is infinite” (Psa. 147:3-5).

Someone steps into history. Could he be the Son of Man who was with the Ancient of Days in Daniel 7? Was this the child born to be called Wonderful Counselor, Almighty God in Isaiah 9? Would he initiate the new covenant in Jeremiah 31? Would he bring good news to the afflicted, bind up the brokenhearted, and free the prisoners per Isaiah 61? One day in Jerusalem a gathering crowd thought so. “Blessed is the King who comes in the name of the Lord! Peace in heaven and glory in the highest,” they cried out. The skeptical religious leaders demanded an end to it. Jesus said, “If these become silent, the stones will cry out!” It was a pregnant moment. Something was happening far beyond what was visible to the eye, a man riding on a colt over coats and palm branches laid before him. They were worshipping him and he did not object (Luke 19, Matt. 21).

We are fascinated with the night sky because we sense there is more to reality than we see or comprehend. We are attracted to the beauty of light amidst deep darkness. Jesus said, “I am the Light of the world; he who follows Me will not walk in the darkness, but will have the Light of life” (John 8:12). Follow that Light and you will know the mystery beyond the stars.

Journey Toward
Scroll to top