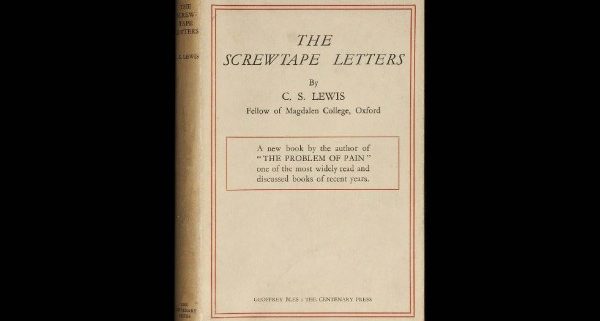 C. S. Lewis imagines the world of temptations and temptors in his book “Screwtape Letters.”  In it, he has an evil creature Screwtape writing letters to his nephew Wormwood, a demon in training.  Lewis hoped that the uninformed would be drawn to it as a sort of a joke, but indeed he was as serious as temptation really is.

Much of the advice Screwtape gives Wormwood is intended to keep people from acknowledging the reality of God (the “Enemy”) by maintaining an unhealthy connection to the world around them.  Lewis’ world at the time was the Blitz of London in 1941.

His primary inspiration was the Bible which, for one example, records the temptation of Jesus.  The devil made efforts to connect Jesus to this world by using the human need for food and desire for possessions.  Jesus responded by reciting the Hebrew Scriptures which emphasized dependence on God and other-worldliness.  Much about resisting temptation is packed into the words, “You shall worship the Lord your God and serve Him only” (Luke 4).

Lewis portrays Screwtape writing, “Our best method of attaching them to earth is to make them believe that earth can be turned into Heaven at some future date by politics, or eugenics, or ‘science,’ or psychology, or what not.”  Indeed God made us stewards of the earth, but to the extent improving conditions on earth or the plight of people omit the Creator, they are in vain.  The temptation is to believe in human devices to fix everything that is wrong.  “The wisdom of this world is foolishness before God” (1 Cor. 3:19).

Lewis addresses the longterm habit of godlessness.  The temptation is to think of life as a continuously running play rather than the final act before eternity’s curtain call.  Screwtape’s letter says, “The job of their Tempters was first, of course, to harden these choices of the Hellward roads into a habit by steady repetition.  Thus gradually there comes to exist at the center of the creature a hard, tight, settled core of resolution to go on being what it is, and even to resist moods that might tend to alter it.  Here at last is a real and deliverable, though not fully articulate, rejection of what the Enemy calls Grace.”

Rejection of God’s grace is the ultimate deception.  Was Jesus thinking that when He invited us to pray, “Lead us not into temptation” (Luke 11:4)?  Fortunately for us, “God is faithful, who will not allow you to be tempted beyond what you are able, but with the temptation will provide the way of escape also, so that you will be able to endure it” (1 Cor. 10:13).  By God’s grace we can resist temptation, and worship and serve Him only.

A Statement
Scroll to top