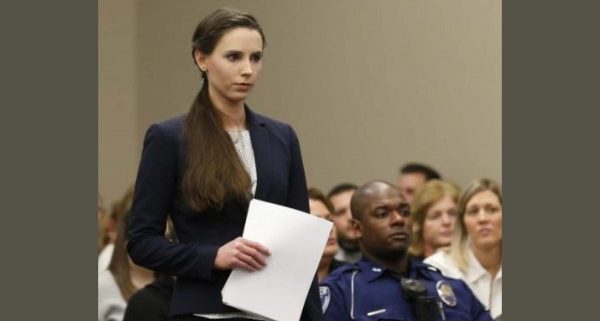 Rachael Denhollander had her day in court.  She spoke not only to the doctor, Larry Nassar who abused over 150 young gymnasts in his care, but also to the judge, other victims, and to all of us.

Her most quoted statement to Nassar is, “I pray you experience the soul-crushing weight of guilt so you may someday experience true repentance and true forgiveness from God, which you need far more than forgiveness from me – though I extend that to you as well.”  This was in the context of her oft repeated theme, “How much is a little girl worth?” as she argued for the maximum penalty.

One might ask, if she is willing to forgive him, why ask the judge to throw the book at Nassar?  In short, because forgiveness does not mean there are no consequences.

Denhollander argued that the victims have value.  For the judge to let Nassar go would be tantamount to declaring that his crimes didn’t matter, nor did the young gymnasts’ shattered lives.  In fact, the judge would be irrelevant too, if he did not impart justice.  Consequences affirm that judges, crimes, and little girls do matter.

This illuminates the Christian message of substitionary atonement, i.e. Jesus dying on the cross for your sins.  The question is, if God wanted to forgive, why didn’t he just do it without that bloody execution 2000 years ago?  For God to just “let it go” would mean that morality doesn’t matter.  If morality doesn’t matter, i.e. what people do to themselves and to others, then people don’t matter and even God is irrelevant.  No, Divine justice requires consequences for sin.

Enter Jesus.  As the only mediator between God and people, He “gave Himself as a ransom for all” (1 Tim. 2:5-6) to release you from the penalty of sin.  In other words, God presented Christ as a sacrifice through the shedding of his blood to demonstrate his righteousness, “so that He would be just and the justifier of the one who has faith in Jesus” (Rom. 3:21-26).  As God is righteous and just, a price must be paid.  Jesus paid it all so the Father could forgive you.

The forgiven becomes the forgiver in God’s trickle down economy.  That’s hard to do on your own.  Max Lucado writes, “Logic says ‘bloody his nose.’  Jesus says, ‘wash his feet.’  Logic says ‘she doesn’t deserve it.’  Jesus says, ‘You’re right, but you don’t either.’ ”  Denhollander’s forgiveness and willingness to see her abuser in heaven are evidence of the forgiving power of Christ.

Grace means receiving forgiveness you don’t deserve.  You are set free from the eternal penalty of sin by believing Jesus.  To be set free from today’s anger, hurt, and bitterness, be a forgiver.  You can because He is.