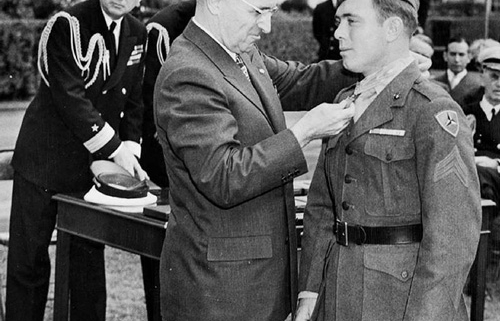 “I don’t have any idea how I did it,” Woody Williams said. PTSD must have something to do with his lack of memory about the day he was in the fight of his life.

It happened in 1945 in the black sands of Iwo Jima. The Marines had trained him as a weapons specialist. When tanks failed to open a lane for the infantry to advance, he volunteered to eliminate a network of concrete pillboxes and mines. Carrying special weapons meant he could not carry a rifle, so four Marines accompanied him.

For four hours, he attacked and returned to replenish his weapons. He faced small arms fire and a bayonet surge. His courage and success allowed his company to reach its objective. Two of his protectors died that day, the same day the Marines raised the American flag on Mount Suribachi. Later that year, President Truman presented Williams the Medal of Honor. He was 21.

Williams was a tormented hero. What he had done in battle and the loss of those two men left him with a burden of guilt. He suffered recurring, fiery nightmares. He had suicidal thoughts. Yet he wanted to remain self-sufficient. “I didn’t need God in my life,” he said. He was in a new fight – to survive his memories.

When he was 38, Williams reluctantly attended an Easter service with his family. When the preacher mentioned the sacrifice of the Lord Jesus who takes away sin and guilt, Williams remembered the Marines who sacrificed their lives. He realized his own need. That day he placed his faith in Jesus, the God who sacrificed His life. “That day, my life changed,” he said. The nightmares stopped.

Williams had a long career serving his fellow veterans. He served as chaplain of the Medal of Honor Society for 35 years, and was not ashamed of his Christian faith. He could say with Paul, “I have fought the good fight, I have finished the course, I have kept the faith. In the future there is laid up for me the crown of righteousness, which the Lord, the righteous Judge, will award to me on that day” (2 Tim. 4:7-8).

What is the good fight? For Williams it was the fight against the guilt of what he had done, of surviving when others didn’t. It was confronting selfish pride, which would limit his service to others. Ultimately it is a fight to trust not yourself, but the God who loves and forgives, the God who grants righteousness to those who believe. “I am not ashamed of the gospel…for in it the righteousness of God is revealed from faith” (Rom. 1:16-17).