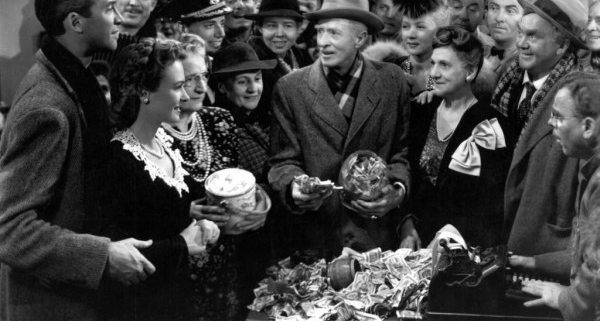 The wrapping paper’s on the floor.
That moment of giving is no more.
This year’s Christmas is now gone past.
What now remains is the gift that lasts.

The movie “It’s a Wonderful Life” became a classic Christmas film.  Christmastime is the setting at the beginning and end.  But it’s not about Christmas presents though it is about giving.

George Bailey (played by Jimmy Stewart) learned about life from his father, Peter, who ran the town building and loan. In contrast to the rich and miserly Potter who owned the bank and abused the townsfolk, Peter told George, “I feel that in a small way we are doing something important.  It’s deep in the race for a man to want his own roof, and we’re helping get those things in our shabby little office.”

After Peter passed unexpectedly, Potter insulted the man while arguing to close the building and loan.  George responded, “In the twenty-five years since he and Uncle Billy started this thing, he never once thought of himself. He didn’t save enough money to send Harry to school, let alone me. But he did help a few people get out of your slums, Mr. Potter.”

To keep the family business open, George assumed his father’s position.  It cost him his lifelong dream of hearing anchor chains, plane motors, and train whistles, and building airfields, skyscrapers, and bridges. He stayed home while Harry went to college.

In one scene the flirty Violet, a lifelong friend, needed a new start in life.  George helped her with the means to go to New York.  Her response? “I’m glad I know you, George Bailey.”

Near the end of the movie, George found himself in a crisis not of his making.  While contemplating a leap off the bridge, he realized how many lives he had touched in Bedford Falls.  With renewed enthusiasm for life, he returned to his family.  When news spread that George was in crisis, his friends rushed to help.

Jesus said, “Give that which is within as a charitable gift” (Luke 11:41).  As portrayed by George Bailey, that means humility, service, and putting others before self.  It means authentic friendships.  That’s far more than seasonal Christmas giving.  That is being a life giver, someone people are glad to know.  By faith, you are especially equipped with something to offer.  “Those who receive the abundance of grace and of the gift of righteousness reign in life through the One, Jesus Christ” (Rom. 5:17).

Christmas is a celebration of God’s great gift.  “The gracious gift of God is eternal life in Christ Jesus our Lord” (Rom. 6:23).  Join with the saints in saying, “Thanks be to God for His indescribable gift” (2 Cor. 9:15).  This gift of life in Christ, the gift that lasts, equips you as a life giver.

No More Time
Scroll to top