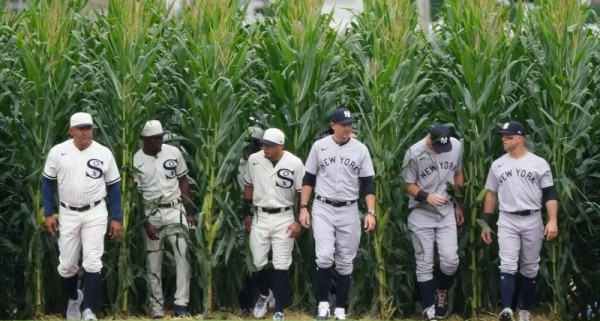 A walk-off, game-ending home run is not uncommon in major league baseball. But this was unique because it happened in an Iowa cornfield.

On Aug. 12, the Yankees and White Sox played the unique game near the movie set of “Field of Dreams” (1989). In the movie, Kevin Costner played farmer Ray Kinsella. Ray’s father taught him to love the game. As a young man, Ray rebelled and became estranged from his father. After his father died, Ray hears a voice. “If you build it, he will come.”  He plows up corn to create a baseball field.  Soon, ghosts of famous players appeared. After the last game as the ghost players disappear into the corn, the catcher removes his mask at home plate. It was Ray’s father, who came to heal the pain of their separation.

The movie taps the human longing for reconciliation. We lament a broken relationship and wish it had not happened. We long for the way things were, for times of innocence. This is why the best gifts from a parent are healthy childhood memories. Call it lived experience or hindsight, but we prefer calm over storms, simple over complicated, acceptance over rejection.

Living with past hurt is a Biblical theme.  The beautiful city of Jerusalem, the center of life and worship, was desolate and ruined.  The Babylonians sacked the city and deported the people. “In the days of her affliction and homelessness, Jerusalem remembers all her precious things that were from the days of old” (Lam. 1:7). But the people were not without hope.  “The Lord’s lovingkindnesses indeed never cease, for His compassions never fail.  They are new every morning. Great is Your faithfulness” (Lam. 3:22-23). They had failed God, but He would not fail them.

Those who have experienced the kindness, forgiveness, and compassion of God have their deepest longings satisfied. “When the kindness of God our Savior and His love for mankind appeared, He saved us” (Tit. 3:4-5).  When you round third base and look toward home you will see your longing realized. Your Heavenly Father awaits to reconcile with you, face to face.