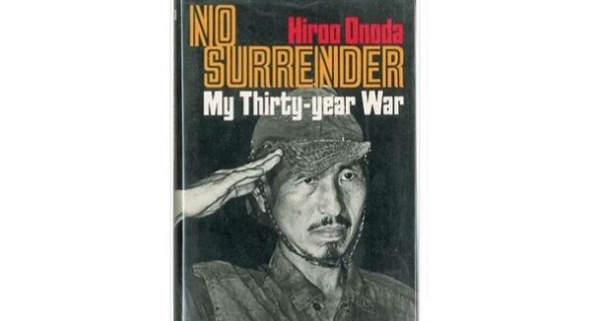 Hiroo Onoda was a WWII Japanese army intelligence officer assigned to a clandestine operation in the Philippines. After the war ended, he refused to surrender for 29 years.

Onoda lived in a hut in the mountains, carrying out guerrilla activities. After the war, authorities dropped multiple leaflets with military information and family letters urging him to surrender. It was all propaganda to Onoda. He lived in ignorance of the truth that the war had ended, which excluded him from a peaceful, civil life. After locating him in 1974, the Japanese government sent his former commanding officer to relieve him of duty. “Whatever happens,” he had promised Onoda, “we’ll come back for you.” When he finally did, it meant Onoda was at a crossroad. He surrendered his sword. The Philippines later pardoned Onoda for crimes against their people.

Life is a story, isn’t it? “Every man is hanging by a thread or clinging to a precipice,” G. K. Chesterton writes. “Existence is a story, which may end up in any way.” The rising action and uncertain information thicken the plot. The protagonist embraces the truth and resolves the conflict. The Japanese soldier might never end his war, but he did.

The Christian worldview sees a plot trajectory in all lives. In the rising action, the characters think they have sorted truth from propaganda. Yet, they live “in the futility of their mind, being darkened in their understanding, excluded from the life of God” (Eph. 4:17-18). But the truth leaflets keep dropping and finally someone comes and asks for their swords.

At that moment, the action stops. “All Christianity concentrates on the man at the crossroads,” Chesterton writes. Will he see that the “truth is in Jesus” (Eph. 4:21)? The Lord Himself has come for him. “Yes, I surrender my sword!” he cries. By faith he accepts the truth and is included in the life of God. He is pardoned for his sin and prior disbelief.

How thrilling to see yourself in that story! It means “you lay aside the old self” and are “renewed in the spirit of your mind and put on the new self, which in the likeness of God has been created in righteousness and holiness of the truth” (Eph. 4:22-24). That renewal provides you the clarity to resist the propaganda of a culture that is untethered from reality and ultimate truth. You live a righteous and holy life because that’s your new identity.

The life of faith is the denouement of the story, the new normal. It is the beginning of an amazing grace story, a story of love, peace, and purpose despite the daily reminders of your former clandestine life. You have a new story because something happened at that crossroads. You surrendered to the Truth. His name is Jesus.