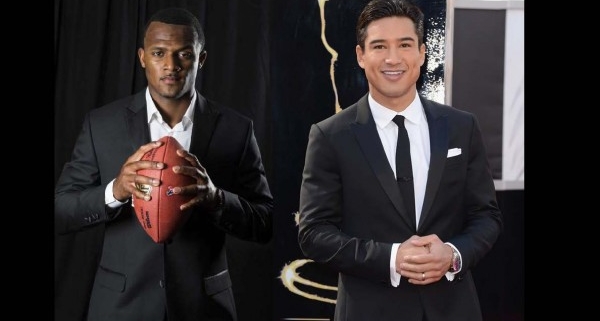 America’s Voices In Israel is an organization that arranges trips to the Holy Land for prominent and influential Americans. Let’s hear from two men who had similar experiences on their trips.

As a believer in high school, Deshawn Watson prayed about his football career. He agreed to play at Clemson and was key to their college football national championship in 2016. He went on to become a star for the Houston Texans. During his trip to Israel, he was immersed in a place thought to be where John baptized Jesus. “It is simply overwhelming to be baptized in the waters of the Jordan River,” he said.

Mario Lopez began his acting career in 1984 and soon landed a key role in the TV sitcom “Saved by the Bell.” He still makes regular appearances in both small and large screen roles. He also received baptism during his trip to the Holy Land. On Twitter he announced, “I’m about to get baptized. It’s a beautiful day. There’s a really cool Catholic priest that’s gonna do me the honors. So I’m going to join these fine folks and then, bam! It’s on!”

The Jordan River meant quite the experience for those two men, as it did for John the Baptist. He baptized there to reflect repentance from sin, but he resisted baptizing Jesus “who knew no sin” (2 Cor. 5:21). Jesus insisted, “In this way it is fitting for us to fulfill all righteousness” (Mat. 3:15). Jesus’ baptism inaugurated his public life, and associated Him with John’s prophetic message. Jesus’ life, death, and resurrection reveal the righteousness of God, accessible to you by faith (Rom. 1:17).

Christian baptism is often misunderstood as the entry point to a lifetime of earning God’s favor. Oxford Professor John Lennox likens that view to a college career. “There’s an entrance process and ceremony that gets you started. A few years later you face your final exams. Your professors cannot guarantee you graduating because the system is based on merit. People say, ‘Yes, my religion is like that. There’s a ceremony performed on a child or adult. There are teachers, but they cannot guarantee that at the final assessment God will accept me. I behave as well as I can, and cast myself on the mercy of God.’ That’s not Christianity. In religion, acceptance comes (hopefully) at the end of the journey. In Christianity, it comes at the beginning.”

Baptism, then, is a celebration of life and acceptance by God! It acknowledges God’s righteousness as a gift by grace through faith (Eph. 2:8). It is authorized by Jesus when he tells his followers to baptize new disciples in the name of the Father, Son, and Holy Spirit (Luke 28:19). Baptism is your first witness to the world that you believe Jesus and identify with Him. Let’s go down to the river!

Of Men and Angels

Beginning and Ending
Scroll to top