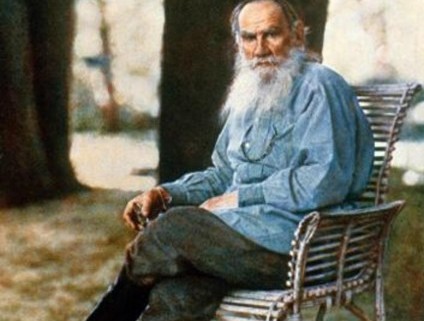 Leo Tolstoy was a Russian author probably best known for his massive novel, War and Peace. He died in 1910 at age 82.  He was a master storyteller, and his later works were influenced by his personal experience of a profound Christian awakening.  One of these is a short story, What Men Live By.

The story is about an angel, Michael, sent by God to collect the soul of a new mother. Michael couldn’t do it, so God sent another angel to complete the task, and Michael to earth as a human until he learned some profound lessons.  A poor cobbler found Michael cold and hungry, and took him home.  The cobbler’s wife’s initial resentment soon melted into pity, and Michael quickly learned the cobbler trade under the tutelage of his compassionate host.

One day a rich man came into the shop demanding that sturdy boots be made from the fine leather he brought, threatening prison if the workmanship failed. Needing the money, the cobbler accepted the commission despite the risk.  After entrusting the task to his skilled apprentice, he was shocked to find that Michael made slippers instead of boots.  But later that day the rich man’s servant came with news that his master had passed away, and actually needed slippers for his burial.

A year later, a woman entered the shop with two little girls. She shared that she was raising the girls as her own, though they were orphans.  Michael realized in that moment that the girls’ birth mother was the one he couldn’t take.  He also realized that he had learned the lessons God had for him.  He explained, “I have learned that all men live not by care for themselves, but by love.  It was not given to the mother to know what her children needed for their life.  Nor was it given to the rich man to know what he himself needed.  Nor is it given to any man to know whether, when evening comes, he will need boots for his body or slippers for his corpse.  God does not wish men to live apart, and therefore he does not reveal to them what each one needs for himself; but he wishes them to live united, and therefore reveals to each of them what is necessary for all.”

Tolstoy begins the story with an epigraph on love from 1 John 3. In this passage we encounter what can be quite uncomfortable demands, such as “Whoever has the world’s goods, and sees his brother in need and closes his heart against him, how does the love of God abide in him?”(17).  We are to follow “His commandment that we believe in the name of His Son Jesus Christ, and love one another, just as He commanded us”(23).  As each believer lives this Christian ethic, so the world experiences the love of God.