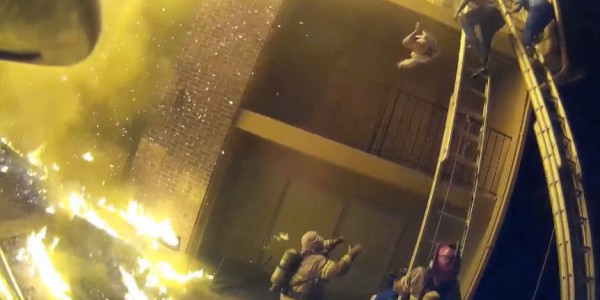 Did you see that story a few weeks ago about a DeKalb County Georgia firefighter who caught a child tossed from a third-floor balcony? Capt. Scott Stroup was in the right place, and a helmet camera caught the dramatic rescue. The child was OK, and everyone escaped.

Imagine being the parent of that child, faced with such a decision. Risk falling down the ladder trying to carry the child, or toss him? At that moment, looking down, the parent saw someone and believed he was willing and able to catch the child. It was an informed belief.

The nearly tragic story helps explain the nature of faith. Some think that all faith is “blind faith.” That is, if you want something to be true but you have no evidence that it is, you simply connect the dots with faith. That parent had faith in the firefighter, but it wasn’t blind.

I’ve heard it said that religion has unquestionable answers, but philosophy has unanswerable questions. Frankly that sentiment does a great disservice to both, since they both purport to seek and value truth. Hidden in that turn of phrase is the assumption that religion is really just blind faith. Perhaps much that passes as religion is.

What evidence do God-believers have to assure us that we haven’t fallen into a blind faith trap? Vince Vitale in “Jesus Among Secular Gods” explains that science gives us evidence of the existence of God. He lists four truths about the universe: it has a beginning; it is knowable; it is regular; and it is finely tuned for life.

Some of the loudest objections to the Big Bang Theory were from scientists who thought it sounded too much like the Bible. It holds that the universe had a beginning, but they thought the universe was eternal.

Science would be pointless if the universe isn’t knowable. Einstein said, “The most incomprehensible thing about the universe is that it is comprehensible.” How could an unknowing, random universe produce comprehending humans by chance? That we can stare at the stars and know the light is from another time and place begs for a different explanation.

A regular universe explained by physical laws is what you would expect in a world created by a God of order who wants to be known. You can say the same thing about the delicate balance of Earth and its solar system that makes life possible. It’s what you’d expect from a Designer.

In fact, it seems that a non-theistic explanation of the origin of the universe is the blind faith here. The evidence means that “by faith we understand that the worlds were prepared by the word of God, so that what is seen was not made out of things which are visible” (Heb. 11:3). That’s un-blinded faith.