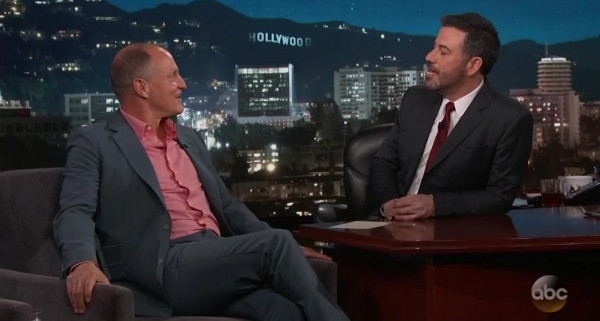 Harrelson told Kimmel he stopped pursuing religious beliefs.  He decided, “Let’s just put this whole idea on hold so that I can have a twenties and thirties of extreme hedonism.”  He got a big laugh.

Appreciate the honesty, if not the humor.  The assumption is clear.  If God exists, I can’t have my fun.  Os Guinness says, “Sin is essentially and willfully narcissistic, and it includes both a truth claim (‘God is dead’) and a task (‘I am now out to be God in my life’).”  Those sound more like deceit and bondage than truth and freedom.  I don’t want that for my friends.

A Pew Research poll indicates that most people (56% of U.S. adults) agree with Pence, believing in God as described in the Bible.  At Hillsdale College recently, Pence noted, “Faith has always been the wellspring of hope for millions of Americans, and from our Founding, faith has been the foundation of our freedom, and religion essential to our republic.”

Truth exists whether you believe it or not, and it confronts.  Does naturalism really explain why atoms, cells, creatures, and planets appear so designed?  Why were the eye-witnesses of the Resurrection of Jesus so willing to suffer rather than deny what they saw?  Logic and reality point to truth.  Francis Schaeffer said, “The nearer (a non-Christian) is to the real world, the more illogical he is to his presuppositions.”  You can try to make that dilemma disappear by reading a (oft-refuted) Hitchens or Dawkins book, but isn’t that confirmation bias?

This cultural moment wants us to put God “on hold.”  G. K. Chesterton wrote, “We have long past talking about whether an unbeliever should be punished for being irreverent; it is now thought irreverent to be a believer.”  Yet we do believe, and carry a burden for friends who don’t.  We hope that just because someone does not believe today, the day will come when the truth and love of God in Christ become compelling.  We all need a come-to-Jesus moment.  Why not?

How does the believer respond?  The Bible says, “Sanctify Christ as Lord in your hearts, always being ready to make a defense to everyone who asks you to give an account for the hope that is in you, yet with gentleness and reverence” (1 Pet. 3:15).  “Everyone who confesses Me before men, the Son of Man will confess him also before the angels of God” (Luke 12:8).  You can do that.

We were all once unbelievers, loved by God who is willing to show mercy and grace.  His kindness in Christ Jesus is a gift. “For by grace you have been saved through faith” (Eph. 2:8).  The last word does not have to be unbelief.