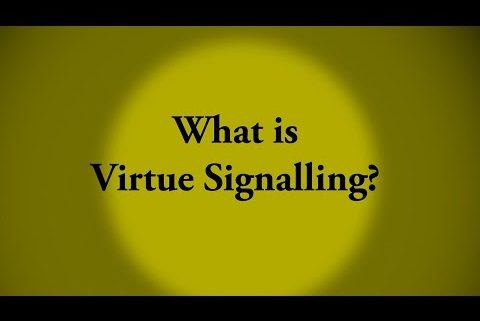 If I was a betting man, I’d put money on “virtue-signaling” to be Oxford’s word of the year for 2017.  You’ve probably noticed it, even if you haven’t heard the term.  When a celebrity is outraged about an issue and co-ops an awards ceremony to express disgust or hate, but otherwise does nothing about it, the point is apparently to signal what a virtuous person he or she is.

James Bartholomew, writing in “The Spectator” (2015) defined the term virtue signaling. He said, “No one actually has to do anything. Virtue comes from mere words or even from silently held beliefs. There was a time in the distant past when people thought you could only be virtuous by doing things: by helping the blind man across the road; looking after your elderly parents; staying in a not-wholly-perfect marriage for the sake of the children. These things involve effort and self-sacrifice.”

Here’s how it works with certain celebs, pundits, and partisans. Hurl accusations of misogyny, xenophobia, or other phobias to signal deep concern for certain groups of people. Vent rage at an opposing-party politician by hating his family.  Take a hydrocarbon-fueled private jet to a European conference to hate on climate-deniers. Support a violent protest of a travel security policy while contributing nothing to resettle refugees.  Jesus called out those who “love the place of honor at banquets” but they “say things and do not do them” (Mat. 23:2-6).

Is it OK to hate something immoral? God does.  He calls these seven things an abomination: “Haughty eyes, a lying tongue, hands that shed innocent blood, a heart that devises wicked plans, feet that run rapidly to evil, a false witness who utters lies, one who spreads strife among brothers” (Prov. 6:16-19).  May God purify your heart and hands of these.  It is humbling to realize that if you have any virtue at all, it is the righteousness of Christ and the exchanged life you live by faith (Gal. 2:20).

Virtue should be on display, but the question is motive. Jesus said, “Beware of practicing your righteousness before men to be noticed by them; otherwise you have no reward with your Father who is in heaven” (Mat. 6:1).  He also said, “Let your light shine before men in such a way that they may see your good works, and glorify your Father who is in heaven” (Mat. 5:16).  See the difference?  When your virtue is on display, it either flatters you or glorifies God.

Our secular culture increasingly disagrees with Christian values, yet you are called to remain steadfast. “Keep your behavior excellent among the (non-believers) so that in the thing in which they slander you as evildoers, they may because of your good deeds, as they observe, glorify God in the day of visitation” (1 Pet. 2:12). And may that day come soon!