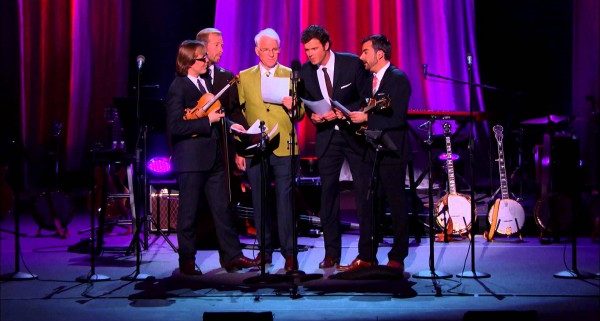 Singing and playing the banjo were not what first brought fame to Steve Martin. His public career began in comedy in the 1960’s when he worked with the Smothers Brothers and Johnny Carson.  Music was part of his stand-up routine, but in the last 15 years or so Martin has made a serious showing in bluegrass music.

I’m sure Martin meant no offense with his satirical tune “Atheists Don’t Have No Songs,” and it is a catchy tune (look it up on YouTube). The lyrics include, “Baptists have the Rock of Ages.  Atheists just sing the blues.  For atheists there’s no good news.  They’ll never sing a song of faith.  For atheists, they have a rule, the ‘he’ is always lower case!”  As concerned as I am for my friends who have yet to believe, I find little humor here.  And whether or not they have songs, I’ll leave between them and Martin.

But this I know. We Christians have songs.  Once I heard Dr. David Kirkpatrick liven up a systematic theology lecture for sleepy seminarians when he declared that the most profound hymn ever written is “And Can It Be.”  Billy Graham said in 2005 that this is his favorite hymn.

To understand the emotion of the hymn, you must know what happened to the author just days before he wrote it. Though raised by godly parents in the Anglican Church, Charles Wesley reached adulthood troubled and searching.  A Moravian brother in London led him to understand that his best endeavors for God were not enough.  He embraced God’s grace through faith, and was saved.  He said, “I now found myself at peace with God, and rejoiced in hope of loving Christ.”

So, he marveled at his good fortune with this: “And can it be that I should gain an interest in the Savior’s blood?  Died He for me who caused his pain! For me, who Him to death pursued?  Amazing love!  How can it be that thou, my God, shouldst die for me?  Long my imprisoned spirit lay, fast bound in sin and nature’s night.  Thine eye diffused a quickening ray.  I woke; the dungeon flamed with light.  My chains fell off, my heart was free!  I rose, went forth, and followed thee.”

These two stanzas are not all of it. The hymn taken in its entirety expresses the burden of the soul, the marvel of God’s plan, the identity and purpose of our Savior, and the blessed release of believing and receiving the hope of eternity.  “In Him we have redemption through His blood, the forgiveness of our trespasses according to the riches of His grace which He lavished on us” (Eph. 1:7).

Yes, we have songs, and we are more than willing to share the lavish riches with our atheist friends. Everyone needs a song.

The Messenger
Scroll to top