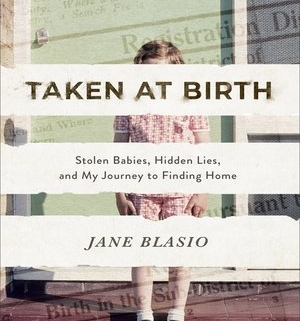 Jane Blasio’s search for her birth parents led her to discover a dark secret. Soon the newspapers picked up the story, and the whole world knew.

In 1997, Blasio discovered that Dr. Thomas Hicks had arranged for as many as 200 illegal adoptions during the 1960’s and earlier. Often he led a birth mother to believe her baby died, then he sold the baby to families from a distant state. Blasio was one of those babies.

Paul Reymann saw the story and noticed some similarities. He, too, had been adopted. His birth certificate listed Hicks as attending physician. He learned that his parents had traveled out of state, paid the doctor in cash, and received him at the back door of the clinic.

Using DNA testing, Reymann located his birth father who welcomed a relationship with the son he didn’t know existed. Reymann said, “He could have just swept all of (his past) under the rug and I’d still be out there wondering. He is a man of great character, strong faith in the Lord and I just knew that everything was OK when I hugged him.”

Blasio’s and Reymann’s converging stories have a common theme: the search for identity. That’s not a quest unique to adopted people. “Who am I?” is the question we all ask in some way because it is connected to ultimate meaning. Today’s world offers a menu of answers. Your identity can be sexual, political, occupational, or digital. You can even take a personality test to “discover who you really are.” These identities are incomplete at best, flawed at worst.

You will never know who you are meant to be if you remain alienated from your Creator. Jesus Christ came to fix that. You are created in the image of God but the image is marred by sin, which separates you from God. By faith in Christ, you are re-created and restored. God has “reconciled us to Himself through Christ” (2 Cor. 5:18). The result is that sin no longer defines you. “Your body is a temple of the Holy Spirit. You are not your own. Therefore, glorify God in your body” (1 Cor. 6:19-20).

It is touching that Reymann found peace in the embrace of his birth father. How much more your Heavenly Father offers you a place in the family! “See how great a love the Father has bestowed on us, that we would be called children of God; and such we are” (1 Jn 3:1).

As for Blasio, her birth mother died before they could meet. But that doesn’t mean she doesn’t know her identity. She writes, “If there’s one thing in life I’m sure of…it’s that God loves you and knows who you are and has known you from the beginning.” She has found the answer to the question. Have you?

Reunited By Love
Scroll to top