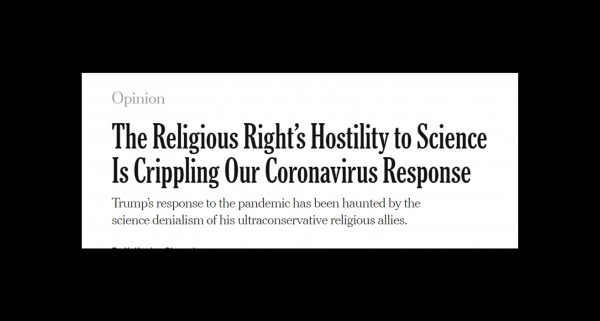 Amidst all the scientific inquiry into the coronavirus, we now know who to blame for the pandemic. Evangelical Christians, per the New York Times. I wonder if the NYT is aware that China, Iran, and Italy do not have large evangelical populations, yet they led the world in COVID-19 cases.

That opinion piece mentions the reluctance of a few churches to practice social distancing, then broadly brands believers as “science-deniers.” Which of course makes it easy to blame Christians for whatever ails society. Listen, there’s plenty of science denial going around these days. I’m sure the NYT would deny that a baby is a living, genetically independent human and thereby has the right to life, or that the universe began at a point in time and thereby could not have caused itself. But I digress.

Jesus spoke to the issue of finding someone to blame for a tragedy. He said, “Do you suppose that those eighteen on whom the tower in Siloam fell and killed them were worse culprits than all the men who live in Jerusalem? I tell you, no, but unless you repent, you will all likewise perish” (Luke 13:4-5). His focus was not on specific fault, but the universal need for repentance. We are collectively and individually to blame for what’s wrong in the world. We inherited Adam’s sin and the whole earth groans and suffers for it, waiting to be set free (Rom. 8:20-22). Jesus is the second Adam, and from Him we inherit life (1 Cor. 15:45). That’s why He calls you to repentance and faith.

We Christians accept the blame for being truthful. Paul defied political and religious sentiments saying, “At the name of Jesus every knee will bow…and every tongue will confess that Jesus Christ is Lord” (Phil. 2:10-11). Peter’s narrow-minded claim was, “There is no other name (Jesus) under heaven that has been given among men by which we must be saved” (Acts 4:12). Jesus dropped this bombshell, “Before Abraham was born, I Am” (John 8:58). That name was first revealed to Moses at the burning bush as the name of God. Such is our precedent for boldly declaring truth.

Somewhere on a dark road, a neon sign penetrates the night with its message, “Jesus Saves.” Is that an anachronism from an unscientific era or a timeless beacon of truth? If Christians are blamed for something, let it be for holding these simple truths: God created the world and you. Because of mankind’s sin, the world is not as it should be. The remedy is Christ Jesus, the Savior, who came to set things right. By repentance and faith you become alive to God as you wait for Him to make all things new, even as He promised. Could the NYT blame you for believing that?

Wait for It
Scroll to top