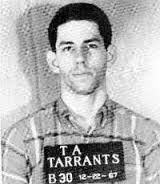 Mrs. Fowler and I attended a weekend conference last month.  After locating our assigned table, I enjoyed making the acquaintance of a rather soft-spoken pastor.  I was later shocked to learn that there was a time I would not have enjoyed being in the same room, much less sharing a meal with him.

I had met Dr. Tom Tarrants.  He is on staff at the C.S. Lewis Institute in Washington D.C.  I was interested in his speaking and writing activities, and he was interested to learn that I pastor a house church.  He being about ten years my senior, I asked for and received his counsel on a few matters.  But that’s not the end of it.

The next morning, I met a young man who also works in the DC area.  I mentioned my dinner companion, and learned that he knows Dr. Tarrants quite well.  Then, I thought jokingly, he said, “So, you had dinner with a terrorist.”  He wasn’t joking.

In 1967, J. Edgar Hoover’s FBI had Tarrants on the Ten Most Wanted list.  As a member of the White Knights of the KKK, he was known to be involved in multiple bombings and crimes of terror.  He was “the most dangerous man in Mississippi.”  The FBI nearly killed him during his capture in the act of placing a bomb.  He earned a prison sentence, but escaped.  After his recapture, and during his years of solitary confinement, he read the Bible, and came to know the real Jesus.  His demeanor was different, the hatred was gone, and he began to make amends even to the agents that captured him.  Many were so moved that they too placed their faith in the One who changes hearts.

Later that morning, I stepped into the meeting room set for 500 people, and saw Dr. Tarrants.  I was still wide-eyed at my startling discovery.  I asked him if I could present his story to you, dear reader.  Giving his reluctant approval, he said, “It’s all about God’s grace.”  God can redeem and change even a hate-filled, domestic terrorist.  Tarrants has testified, “I found myself knowing I needed the grace of God and the forgiveness of my sins.  For the first time, what Jesus did on the cross became really precious and personally important to me.”

Tarrants was an angry criminal who needed rescuing.  But a nice, decent person needs a Savior just as much.  “All have sinned,” which surely we already knew (Rom. 3:23).  There are no degrees of being a Christian; either you are, or aren’t.  Faith in Jesus Christ changes your being.  “If anyone is in Christ, he is a new creature; the old things passed away” (2 Cor. 5:17).

Tom Tarrants is a trophy of God’s grace, a new creature indeed.  One evidence that God exists and the gospel of Christ is true is a changed life.  May your life testify to that truth.